Many have suspected that this mysterious guest blog network is MyBlogGuest.com. This suspicion stems from the fact that the MBG website is no longer viewable in Google’s index when you type in any of the keywords associated with their website. 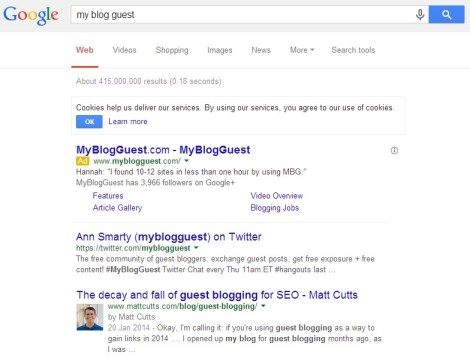 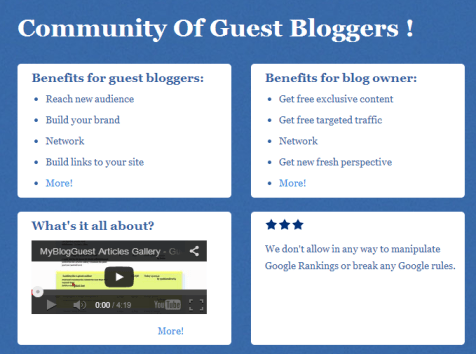 It’s advertised as a community where website owners and those looking to guest blog on other blogs can go to engage in such activities. I’ve used the website on the odd occasion, but I honestly cannot see what they were doing wrong. Ann Smarty, the founder and owner of MyBlogGuest.com, is actually an SEO that I respect quite a bit. She actually says and does quite a lot in regards to respecting Google’s guidelines. However, my opinion of her is unchanged and if anything my respect for her has gone up. Why? The day after Matt Cutts wrote a post about the “decay and fall of guest blogging for SEO” she wrote a response to this and said the following in regards to MyBlogGuest:

“MyBlogGuest is NOT going to allow nofollow links or paid guest blogging (even though Matt Cutts seems to be forcing us to for whatever reason).”

It likely wasn’t a good move on Ann Smarty’s part to say that they would essentially not abide by what Matt Cutts (the head of spam at Google) was suggesting that blog owners do in his latest blog post edition that focused on guest blogging. I think that has really highlighted MBG and they are perhaps suffering from that. I’m actually not sure if Matt Cutts was actually referring to MyBlogGuest.com, as they are against using guest blogging as a means for SEO purposes. Undoubtedly, SEOs would have used this website for other reasons, but I don’t think that is the main premise behind MyBlogGuest.com and they actively police against this.

Let’s take a step back for a minute and actually look at MyBlogGuest.com.

Firstly, they do not allow paid guest posts. They are quite explicit on this and will only accept content based on quality. No payment involved in that at all. In that quote that I referenced above, it seems that Ann Smarty seems to think that Matt Cutts is now forcing content writers to add a nofollow attribute if they link back to their own website in any given guest post they manage to publish on other websites. In my opinion, this is ludicrous if this was the reason why they’ve been penalised. (Read the quote below to see why)

Secondly, if I submit an article about SEO on MyBlogGuest.com, it would first go through a quality check where my content would be first looked at by a moderator. That really distinguishes MBG as they simply aren’t a low quality article database for blog owners. Matt Cutts like to tout about low quality guest posting, but I don’t think that is what transpires on MBG. Essentially both the content creator and the website owner have to manually agree that the placement makes sense for both parties. This would very likely depend on the quality of the website and the quality of the content. I really don’t see the problem here, but apparently Google does.

Search Engine Watch has a neat article on this already and it has a few useful quotes that I’m going to steal from Ann Smarty. The quote at the end of the article is quite telling actually about the sort of service that MBG provide. They are essentially the facilitator of content and it seems that they pretty much followed the rules:

“We are already policing the links: No made-for-SEO links are allowed within our platform (for at least a year now; we’ve been always advocating no-anchor-text links but we started actively policing them 2 years ago, then we stricken the rules even further),” Smarty explained.

“You are free to link to your home page but no keywords are allowed (just names), for example. We’ve also encouraged brand links to social profiles and even created the separate section for Google Authorship and authors who were willing to link to their Google+ profiles.”

So, were MBG just another example to spread fear, uncertainly and doubt in the latest of “blogger network” crackdowns by Google? I would certainly say so. Luckily for MBG they do not rely on Google and SearchMetrics data seems to back this up. Whether or not MBG publishers are being punished by this is another question. 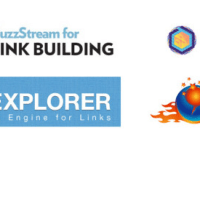